In this last entry about correct extensions (Tips III) we will address some aspects to take into account:

To mix the extender and the ejaculate, there are 2 possibilities: to pour the extender into the semen or vice versa.

Recently an article was published in which both techniques were compared, both from a practical point of view, and assessing a possible effect on several seminal quality parameters (mitochondrial activity, membrane status, motility, …). The results showed that there are no differences between both methods although there is a better distribution, and, therefore, homogeneity of the sperm concentration when semen is added to the extender. In addition, doing so reduces or prevents foaming, and saves time, since the volume to be poured is smaller when semen is added.

What is more, in a first experiment of this study, the addition of the extender was compared by placing the tube in the central area of ​​the container of the ejaculate, or in contact with the wall, and no differences were observed regarding the distribution of the concentration. 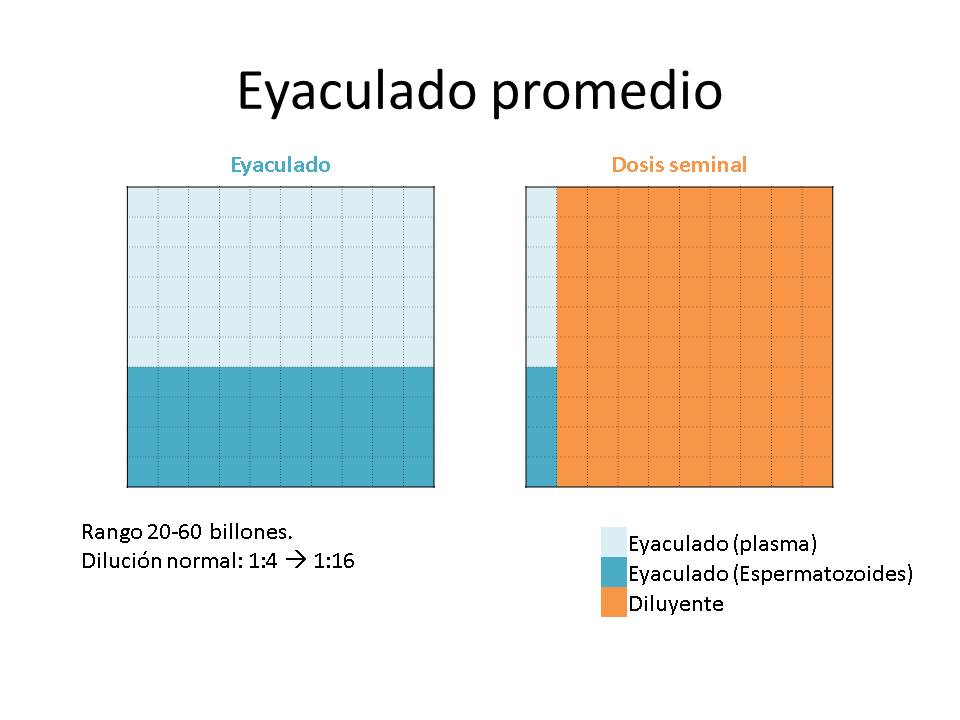 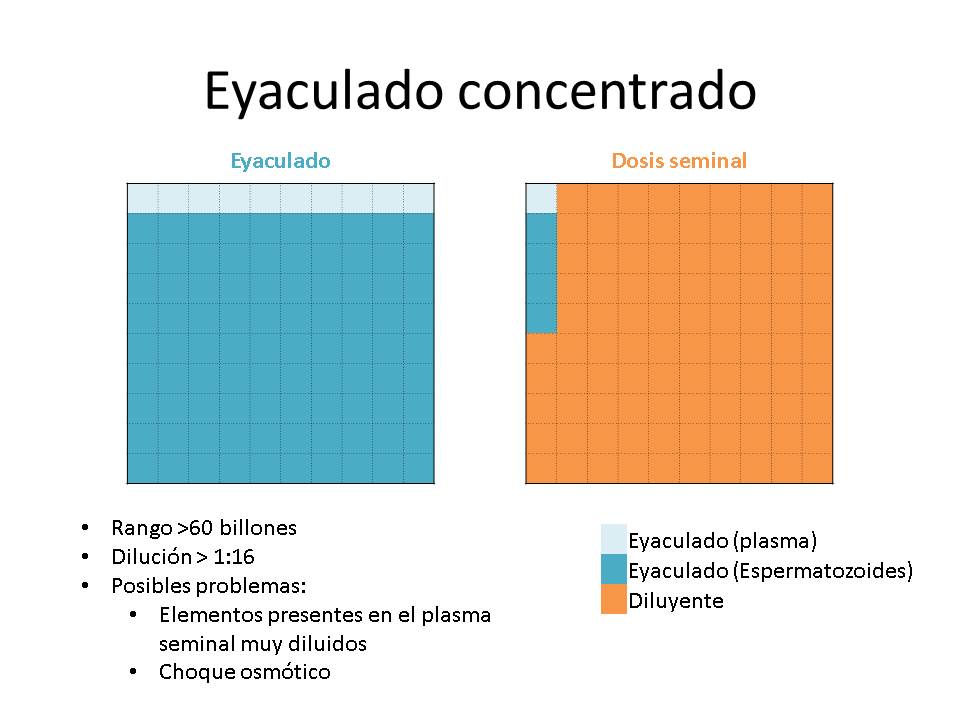 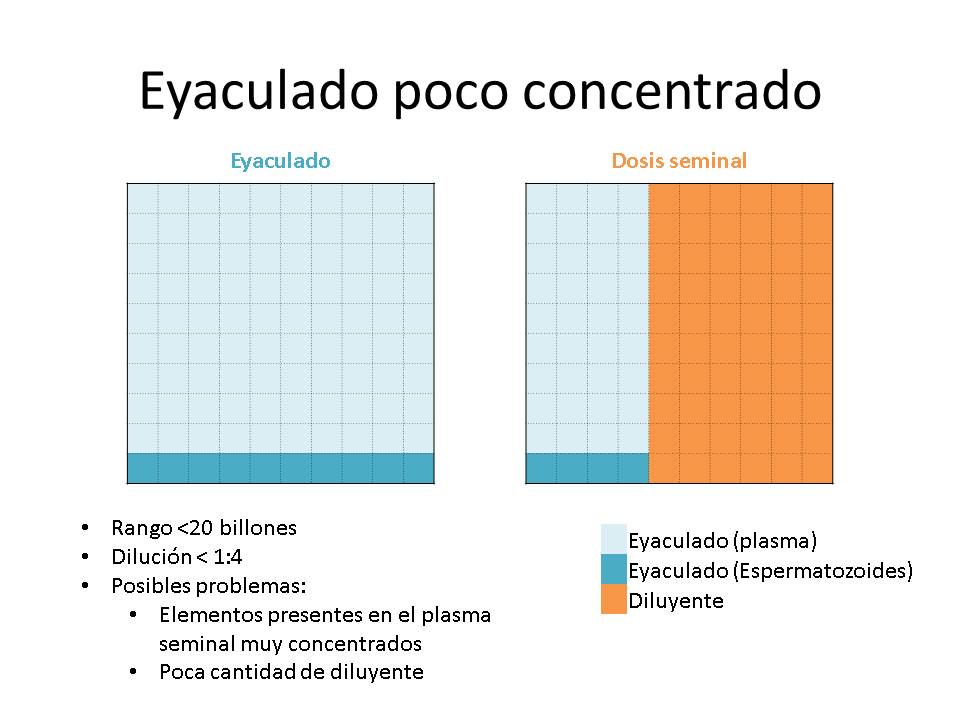 Generally the limits of the extension degree have been established> 1: 4 and <1:16

The negative effect of the degree of dilution was due to the fact that the resulting doses would have a greater or lower amount of seminal plasma, and this could have an undesirable impact on the preservation of seminal doses. Besides, sperm may suffer an osmotic shock.

Nowadays, the biological effect of a greater or lesser amount of seminal plasma in the doses is still unclear, since, on the one hand, it has components that favour sperm preservation, and, on the other hand, it contains others that lead to sperm capacitation. In addition, there is great difference in its composition among boars, within different periods of the year and in the same animal (since its composition varies throughout its productive life).

Regarding the possible osmotic shock when the ejaculate comes into contact with the extender, in the past the extenders used had a different composition in comparison to the current ones. Indeed, they showed higher osmolalities (Ex: Kiev 425 mOsm / kg; Zorlesco 240 mOsm / kg) than the ones of the ejaculate (290-300 mOsm / kg, tolerating between 250-380 mOsm / kg, but being better when it is closest to the physiological one). In very concentrated ejaculates, that need higher volumes of extender, this could cause the final osmotic pressure of the seminal doses to be high, compromising, therefore, their quality and preservation.

However, current extenders have osmolalities similar to that of the ejaculate. So the degree of dilution is a parameter that has been decreasing in importance over the years.

Finally, once the extension and packaging of the doses have been carried out, as we mentioned in the first entry, the temperature decrease should continue, until reaching the storage temperature, without compromising the integrity of the sperm membrane, according to all the factors explained in the entry “Tips I”.

An article was published recently in which 3 different ramps of temperature decrease were evaluated: 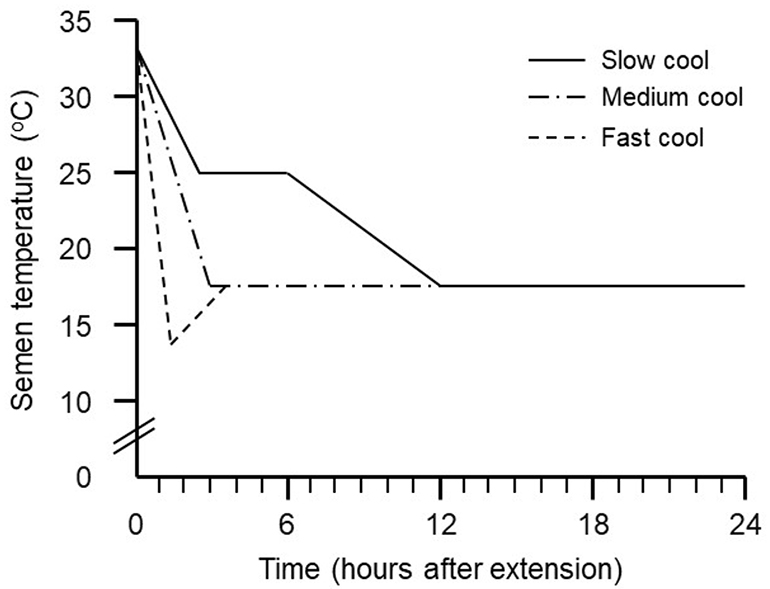 Different parameters of seminal quality were assessed, such as motility, fertility and prolificity in the farm.  The doses that had been subjected to the fast cooling curve obtained lower results for both in vitro and in vivo parameters,   in comparison to those with medium and slow cooling.

Nowadays there are boar studs which carry out the introduction of the seminal doses directly into the preservation chamber, just after packaging, to favour a faster temperature drop.

For the cooling and preservation of the doses you can use cold storage chambers, or modified cold rooms to be able to work at a temperature of 15-17ºC, or rooms equipped with air conditioning equipment that allow to maintain the target temperature are used. All this can be complemented with fans that ease heat exchange and therefore a faster temperature drop.

With this last entry we conclude the “Tips for a correct extension” part.

In subsequent publications we will address the “Tips for a proper dose packaging”.

We hope you find the information useful and we are very grateful for your interest.