Routine monitoring and diagnosis of PRRS in the boar stud (I)

The PRRS virus is a pathogen that generates a great headache in the pig sector, not only because of its genetic variability and its high mutation rate that makes it difficult to control, but also due to the large economic losses caused by the entry of the virus into a holding.

One of the production stages in which it is of particular importance is in boar studs since the semen doses produced will be used in numerous breeding farms. Therefore, it is the responsibility of the boar stud to establish and implement effective biosecurity protocols to prevent the entry of PRRSv and its dissemination within the farm. These measures have a synergistic effect, that is, the result of the sum of the actions is the one that provides the optimal protection and behave like a chain, if a link is broken, the whole of them will be affected. In this article we will talk about one of them, the routine monitoring and diagnosis of the PRRS virus within the boar studs. For this, it is essential that we establish the following points: sampling, frequency and diagnostic technique to use.

In order to monitor animals in a boar stud, we need the most sensitive techniques that detect the infection at its earliest stage. The method that offers these two characteristics is RT-PCR (Table 1), since it exponentially amplifies the virus genome and is able to detect small amounts of it in the sample, using specific primers. The problem posed by this virus is its great genetic diversity, which makes it difficult to have a simple PCR method to detect all variants

Once the test to be performed has been determined, it remains to decide which is the sample to be analyzed (blood, serum, semen…) and what is the frequency of testing (in each extraction, monthly, in the presence of symptoms…).

The transmission of PRRS through semen depends on multiple factors and is quite difficult to predict, believing that the strain of the virus and its virulence have an important role. It also depends on individual host factors that determine the amount of virus in the semen. This leads us to observe cases in which the virus is never detected in semen and other cases where we can detect it for long periods of time. Other dispersal routes in addition to semen may include saliva, feces, urine, and nasal secretions. We should comment that not only animals with symptoms can transmit the virus, there are cases in which animals infected with PRRS have negativized PCR tests in blood and semen, and a post-mortem analysis has found the virus confined to tonsils, being able as reservoirs of the virus. 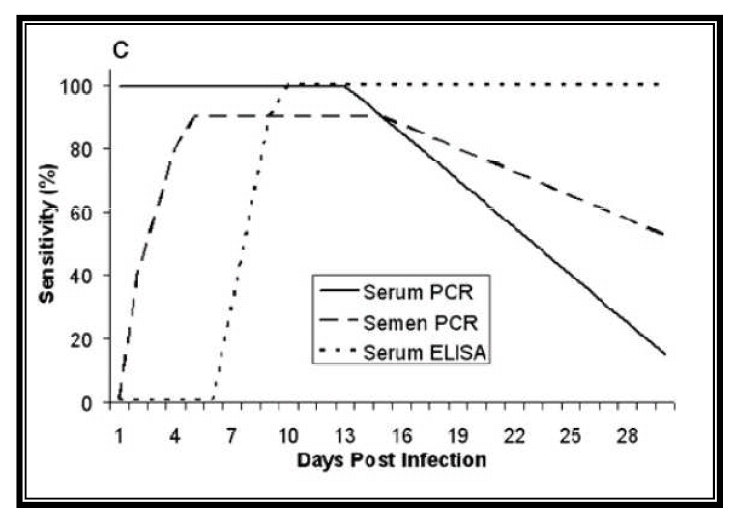 There are several studies where the effectiveness and sensitivity of detection of the PRRS virus in different samples has been compared, being the sample that has presented a greater sensitivity in the detection of blood or serum, with a sensitivity 50-100 times greater than detection in semen. As we have mentioned before, the presence of the virus in the semen is very variable and the arrival of the virus to the reproductive system is through the organic dissemination, thus having to cross the blood-testicular barrier. For that reason, if we want to quickly detect the presence of the virus in our boar stud using semen as a sample, we may be arriving too late. The main advantage of the use of semen is that it is the least invasive method and that it is easier to obtain. Another advantage is that we make sure that all the doses that we produce and that reach the farm are free of PRRS.

The test on serum sample will give us a greater sensitivity, but it has the inconvenience of being a more invasive technique, which must be performed in the jugular vein, saphenous vein or coccygeal vein. Taking the sample is advised to be done during the ejaculate extraction, although this can cause the boar to get off the colt, not completing the ejaculation and hindering the work in the center. Performing this technique on animals 1 or 2 times a week is not practical, therefore, an alternative to regular bleeding would be the proposal in the study conducted by Darwin Reicks in 2006, in which he evaluated the use of venopuncture in the ear (atrial vein) and subsequent moistening of a swab to obtain a blood sample. This method showed a correlation of detection of the virus by PCR of 90% at 24h post infection and 100% after 48h of infection. Of the 60 samples taken, 59/60 were positive with swab, while with usual bleeding 60/60 were positive (Table 2). This study concludes that the taking of samples with swabs and their subsequent introduction into a transport medium composed of saline serum is an alternative to traditional bleeding, being more effective and reliable than other types of samples such as semen and saliva. 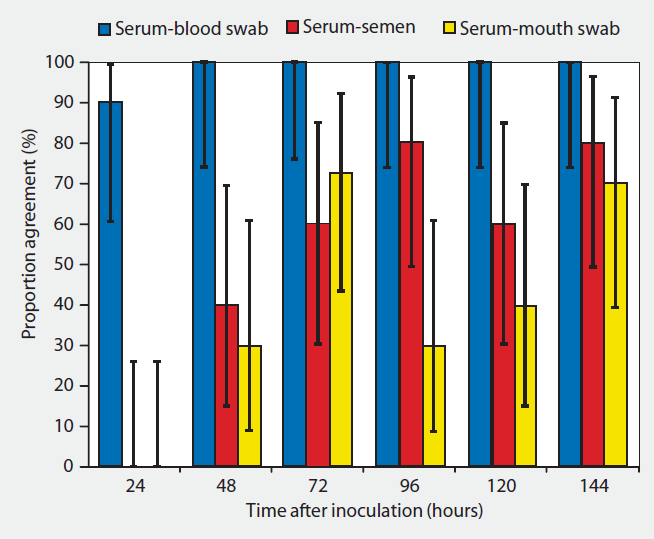 The earliest detection occurs because the virus may be present and in a detectable amount in the blood in the first 24 post infection, while detection in other fluids such as sperm or saliva may vary between 48h and 14 days. This, as mentioned above, will largely depend on the individual and strain of the virus. In Table 3 we can see another example of results in terms of the percentage of positive detected according to the sampling strategy we carry out.

Table 3: early detection of PRRS by PCR depending on the specimen and post-inoculation day.

Regarding the strategy of performing a strict symptomatic control, such as rectal temperature control (> 39.5ºC), coughing, decrease in quality and seminal volume etc. It is not a recommended strategy because, frequently, the infection goes clinically unnoticed, and even the increase in rectal temperature is not correlated with the positive result for PRRS (Tables 4 and 5). Therefore, testing should be carried out whenever symptoms are present, but not as the only virus detection strategy.

Whichever sampling method we choose, we will need to strike a balance in terms of animal welfare and employee ease of work without compromising the ultimate goal of producing doses from PRRS-free facilities.