In this blog post we will continue with the introduction about the boar, today it is time to talk about physiology. For this we will focus on spermatogenesis and its hormonal control. Process by which sperm cells are formed.

Spermatogenesis occurs centripetally in the seminal tubules, comprising the set of stages that take place until finally a germ cell becomes a sperm. This process is completely developed in the testes and is centrally hormonally modulated, through the hypothalamic-hypophysis-gonadal axis. The neuroendocrine system is responsible for its control and the function of the reproductive organs through hormonal regulation. It is formed by the nervous system that carries impulses to the hypothalamus and by the endocrine system, the pituitary gland, which releases the hormones that will act in a peripheral way.

The hypothalamus will be responsible for interacting with the nervous and endocrine system. The hypothalamic pituitary axis transports hypothalamic hormones directly to the pituitary gland via the vascular pathway. These hypothalamic hormones (GnRH) are to be secreted from certain information perceived by the sensory organs. The pituitary gland will perform the endocrine regulatory function, as it is responsible for producing hormones (LH and FSH) that will have a direct effect on target tissues, in this case the testicles. In turn both the hypothalamus and the pituitary are target organs of other hormones produced peripheral (testosterone and inhibin), in this way feedback system is formed that self-regulates on its own, because the hormones secreted from the gonads will reach the pituitary gland, stopping the production of gonadotropins. These circuits will be conditioned by aspects such as age (sexual maturity of the male), photoperiod and light intensity and even feeding, among others. 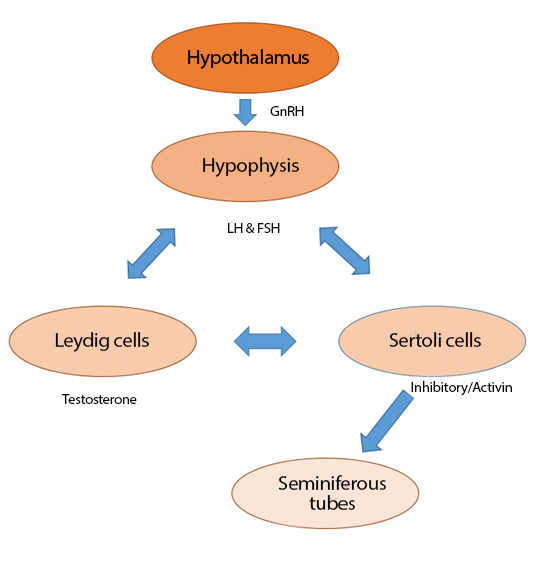 During the growth of the future reproductive, gonadotropin hormones have different functions, for example, FSH is responsible for the proliferation of Sertoli cells that are located in seminiferous tubules during the postnatal period, setting its total number before the prepubertal period. This will determine the testicular size and therefore the sperm production of each individual, once the boar is sexually mature, since Sertoli cells give physical and metabolic support to germ cells.

The LH hormone, intervenes in the proliferation, hypertrophy and establishment of the sexual organs, during the development phase. The main objective of this hormone is Leydig cells, which are located in connective tissue surrounding the seminiferous tubules. These cells have receptors for both LH and FSH. Leydig cells, when activated by the action of LH, will produce testosterone. This testosterone is necessary to maintain the functions of Sertoli cells and the correct development of spermatogenesis. In addition, testosterone is essential when starting the maturity and blood levels of this hormone will depend on the development of the testicles, puberty, sexual maturity and finally the production of sperm.

As we previously discussed, all of this hormonal regulation depends centrally on the hypothalamus and the pituitary gland, and is self-regulated by secretion in the gonads of inhibin, androgens and estrogens that will reach the pituitary gland regulating the production of gonadotropins. Spermatogenesis will completely depend on this process, which is divided into two main parts, spermatocytogenesis and spermiogenesis

Spermatocytogenesis is the initial stage and begins with germ cells or spermatogonia. These cells undergo a drastic expansion both in number and in maturation during the 4-5 months of age and a subsequent stabilization over the 7 months, that is why the stallions should not be used as such until 7 months of age, although this depends a lot on race and genetic line. This is important because each time you try to incorporate younger boars into production due to their better genetics and this ends up being reflected in immature spermiograms. Spermatocytogenesis comprises the phases between spermatogonia and spermatid. Spermatogonia can be: 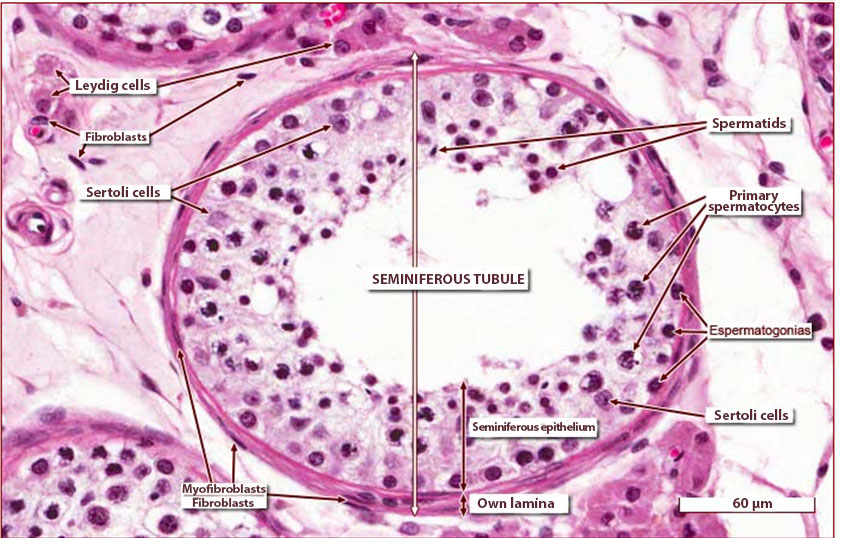 Spermatogenesis culminates with spermiogenesis, which is the phase where changes will occur in those spermatids obtained from spermatocytogenesis until a sperm is obtained. Cellular changes occur mainly at the nucleus level (condensation and reduction of size) and cytoplasm (cytoplasm removal and formation of the acrosome and flagellum). During this process, Sertoli cells, which are found inside the seminiferous tubules and have androgen and FSH receptors for the mediation of the process.

Within this process we find spermiation, this is called the process of sperm release from the protective structure of Sertoli cells to go out into the seminiferous ducts through the testis network and end up in the epididymis, where they will mature along the epididymis’ body, being stored in the epididymis’ tail.

The objective of maturation is to make all the necessary changes to provide the sperm cell the capacity for movement and fertilization. These functions are dependent on androgens and estrogens present in the fluids that will accompany the sperm. The sperm cell has receptors for these hormones. Androgens and oestrogens are essential for the maintenance of epithelial morphology, the supply of binding proteins to the zona pellucida, the acquisition of motility and the protection of cells during storage in the epididymis tail.

As we have seen, the process of seminal production is a complex process, hormonally regulated that can be affected by multiple factors. Seasonality and photoperiod, as well as sows have great importance, the seasonal nature in boars, mainly affects the number of sperm per ejaculate. Sperm quality can be altered by temperature. Heat stress can be a big problem in all areas of pig production, this stress usually affects by decreasing the quality of sperm. A deficit in feeding could also cause a decline in reproductive performance, although we would be talking about prolonged deficits in time, in the end, as has always been said, reproduction is a “luxury” function and can be affected quickly if conditions are not right. Other factors that could intervene in sperm production are the rate of collection, the optimal development and maturation of the boar in its growth phase, among others.

All these factors will ultimately have an impact on the quantitative and qualitative production of sperm, so it is important to develop strategies to minimize the negative effect of these factors and thus maximize seminal production in boars.

With these two posts concludes the anatomical-physiological reminder of the boar. We hope that it has served to consolidate knowledge and understand a little better how the process by which sperm cells are produced and mature works.