In the previous post we gave a series of recommendations for feeding in the different stages of a boar’s life. Today we will go deeper into the energy, protein, lipid and fiber requirements.

For optimal production, it is vital to have a good daily energy intake with specific feed values according to sex, breed, age, time of year, production and genetics. The daily energy requirements of the boar are the result of the needs they have in three situations in which they can be found: in maintenance (for example, it will be higher in environmental conditions that fall below 20º C), growth (in animals that are already in the insemination centers, but have not reached their adult weight), and for seminal production, according to the rate of extraction to which they are subjected.

The energy value of swine feeds has been estimated on the basis of their net energy (NE) content, which is the energy that is actually available to the animal to cover its maintenance, growth and production costs. In other cases, it is valued as metabolizable energy (ME). 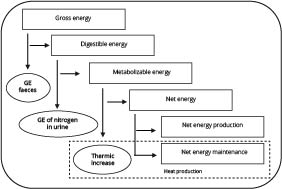 Illustration 1. System for expressing the energy value of food. The gross energy (GE) minus the energy lost in the feces is called digestible energy (DE). Energy is also lost in the urine and through gases; this energy subtracted from the DE is the metabolizable energy (ME). The gross energy, minus the energy lost in feces, urine, gases and heat, is called the net energy (NE). Source: Adapted from McDonald et al (2010)

On seminal quality, energy underfeeding has little effect on sperm concentration or motility, but decreases gonadotropin production, affecting the endocrine function of the testis, which decreases testosterone production and as a consequence, boar libido, ejaculate volume and the concentration of fructose and citric acid in the seminal fluid.

When there is a protein deficiency in the nutrition of breeding males, its effect on spermatogenesis is more evident than an energy deficit. Protein deficiencies greatly influence boar libido and semen production.

The most important essential amino acids are lysine, tryptophan and methionine. There is a lot of research showing that proteins, more specifically lysine and the combination of methionine and cysteine, play an important role in semen production. Methionine and cysteine affect the secretory activity of the epididymis. A deficit of these amino acids causes histological and cytological changes in the testis and negatively affects spermatogenesis and seminal quality.

The main advantage of supplementing feed with lipids is that their palatability is improved, thus increasing the voluntary feed intake and with it, the energy intake. This feature is especially necessary in times when voluntary feed intake is deteriorated by bad environmental conditions, such as summer.

Fatty acids are necessary for reproduction. Linoleic acid is a precursor of prostaglandins and forms part of the structural lipids of the sperm membrane, where it plays an important role in permeability and, therefore, in cellular functioning.

Currently, many studies have been carried out on the improvement of seminal quality thanks to the addition of omega-3 fatty acids present in fish oils and flaxseed oils. The supplementation of these fatty acids increases the volume of the ejaculate, the total number of spermatozoa and the number of normal acrosomes.

It is as important not to reach an energy deficit as it is to overfeed, since an overweight male decreases his libido and increases the risk of leg and hoof problems.

The addition of fiber in boar feed is important for its stimulating action on digestive transit, thus reducing constipation problems, increasing animal welfare and reducing stress. In addition, it promotes satiety and prevents overfeeding problems; but at the same time this is a disadvantage, since adding fiber to the feed reduces its energy content, palatability and feed intake.

A deficit of fiber in the feed can cause abnormal fermentation in the intestinal tract, with the consequent production of toxins that cross the epididymis and alter spermatogenesis in breeding males. In addition, it affects male behavior by increasing stereotypies and behavioral aberrations.